It’s rare that I end up liking any of the comedy movies being released into theaters these days. More often than not, I instead usually find myself rolling my eyes and groaning to all the “potty humor” that seems to be prevalent in most of them now. I can only handle jokes surrounding defecation, urination, flatulence, and sex so much. But occasionally a movie comes along that has a good, old-fashioned sense to it and still brings about those deep-down belly laughs for me. And thankfully, I have a few of those movies in my home collection that I continue to revisit again and again anytime I need to find some humor in life, and one of those is a wonderful Disney flick titled “Enchanted.”

Released in 2007, the film is a clever cross-blend of both animation and live-action that begins in the former with a beautiful singing woman named Giselle (Amy Adams) who’s living in the kingdom of Andalasia and wanting nothing more in life than to meet a beautiful prince to marry. When a series of accidental events introduces her to a prince named Edward (James Marsen), they immediately decide they’re meant for each other and choose to wed the very next day. This in turn draws the negative attention of Edward’s evil step-mother, Queen Narissa (Susan Sarandon), who’s intent upon being the only ruler in the kingdom and not wanting anyone else to have any happily-ever-after’s. To prevent that from ever happening, she disguises herself as an old woman and convinces Giselle that she needs to make a special wish at the large castle fountain before she gets married. Unfortunately for Giselle, it’s just a ploy to remove her from the realm completely by pushing her through a portal, which lands her directly in the center of real-life Times Square in New York City in full marital gown and all.

At first glance, I know this might sound an awful lot like this film is going to be no different than all those other Disney animated movies, where it’s mostly a conglomeration of songs and dance numbers accompanied by some whimsical characters and a good versus bad plot. Movies like The Little Mermaid or The Lion King per say. But trust me when I say that Disney begins to poke fun of itself by parodying its own genre when Giselle attempts to navigate herself through the real streets of New York City trying to figure out where she actually is. So as not to ruin any of the unique and witty humor to come, let’s just say that most of it truly starts when a divorce lawyer and good Samaritan named Robert (Patrick Dempsey) finds Giselle frantically knocking on the door of a glitzy billboard that’s in the shape of a castle. From there, the laughs multiply exponentially when Giselle’s loyal chipmunk Pip discovers Narissa’s evil plot and gets Edward to pursue Giselle through the portal into New York City too. As there, Pip finds himself unable to speak and Edward, still in his full prince garb, begins running around Times Square, sword-a-blazing.

While I’ve never been much of a fan of most of those classic Disney animated films, mostly because I’m not one who enjoys seeing a serious tone and dialogue going on and then suddenly having to deal with a character breaking out into a rousing ballad and dance number, I can safely say Enchanted isn’t that at all. Instead, it takes this typical Disney genre and plays off of itself by plopping those animated characters who usually live in those positive, magical bubbles into the non-animated world of New York City, a place that I grew up near, where people often seemed to me to be quite rude, mean, irritable, and angry on a daily basis.

So, if you happen to be down and out and are looking for something to lift up your spirit, I suggest you check out the movie “Enchanted”. It’s not your typical Disney animated movie by any means. Rather, it’s a film that’s chock full of good-natured laughs that are “potty-free”, original, and truly gut-bursting. And it’s why I give Enchanted my best rating of a full five out of five stars. 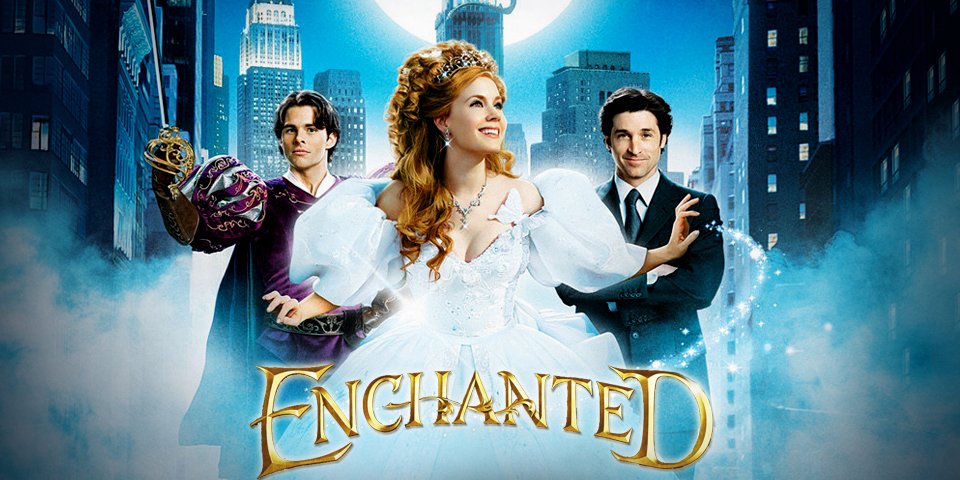