I haven’t eaten at a McDonald’s restaurant in a very long time, really ever since I saw the movie “Super Size Me”, which highlighted much of the unhealthiness of the food that’s regularly served there. Recently I became even more turned off to this fast food chain when I watched a film called “The Founder” that chronicled all the deceptive ways that went into making this huge franchise what it is.

The movie revolves around the man who made it all possible, that being Ray Kroc (played exceptionally by Michel Keaton). From the beginning, the viewer is introduced to him as a washed-up ice cream shake machine salesman. But one day, upon calling his secretary, she informs him of an establishment out in San Bernardino, California that wants to order six of his machines. Given his ongoing lack of sales and string of poor luck, Ray instantly thinks there must be some mistake, so he decides to contact the restaurant. Ironically the place is named “McDonald’s” and is owned by two brothers, Dick McDonald (Nick Offerman) and Mac McDonald (John Carroll Lynch), who in turn inform him there’s no mistake and that business is so good, they probably need to order at least eight of his machines. Ray, being the salesman he is, instantly is curious as to their success formula so he decides to head out west, driving across the country to see what this place named McDonald’s has to offer, that no one else seems to. There, he finds the McDonald’s brothers have created an ability to serve food faster than any other existing restaurant out there and with pretty great quality. Seeing the potential for a franchise and huge dollar signs, Ray immediately wants a piece of the action, except Dick and Mac aren’t so thrilled with the idea due to some of their previous attempts to expand it themselves. But Ray is that relentless type of salesman, who always seems to know what to say and how to say it, just to get what he wants. When the McDonald’s brothers finally cave in to his repeated pressures, albeit it reluctantly, Ray promises fortune and fame will come their way because of it. But eventually, when Ray’s profits from expanding the chain are not measuring up to all the effort he’s put into it thus far, it becomes overly apparent just how much of a salesman he truly is and how far he will go to get what he wants, no matter who gets hurt in the process.

Watching “The Founder” ultimately reminded me so much of all those pyramid-based companies out there I’ve either tried to work for over the years or been attempted to be recruited into. Places like Amway, NuSkin, Herbal Life, various co-op electric companies, or these days, a number of businesses who sell holistic products. Each promising huge dollar signs and great returns if you become a salesperson for them. They give awesome presentations and seem to know exactly what to say to get someone involved, and even when you don’t choose to, they find a way to at least get you to buy their product(s). But if one does get involved, the only concern then becomes where the next sale will come from. In the past few years, it’s grown even worse, as I’ve fielded a number of phone calls and emails from people who I haven’t heard from in years, where they initially say hi and how they miss me, until the real purpose of their call occurs, that being me as the recipient of their sales pitch to the product(s) of one of these companies.

I’m definitely not cut out to be a salesman like that, using my friends as a source to make money off of. I also don’t like lying, manipulating, cheating, or being deceptive in any way, shape, or form, just to make my bank account grow. But regrettably, I must admit I once did just that, using friends and loved ones to pitch product(s) from one of these companies, just to make a buck for myself. And it never did feel right to my soul either. Yet there are plenty like Ray Kroc, and many others in this world, who feel otherwise and believe making money is the only thing that matters. In the process of doing so, they often promise the world to those they pitch to, yet in the end, many are frequently left with little to no return, like Ray did with the McDonald’s brothers.

Nevertheless, “The Founder” is a great film that highlights all the deception that went into creating McDonald’s into the billion-dollar company it’s become these days. And although I’m even more convinced now to never spend my money at any of their establishments, I highly recommend you see this film, at least for educational purposes, and give it 4 ½ stars out of five. 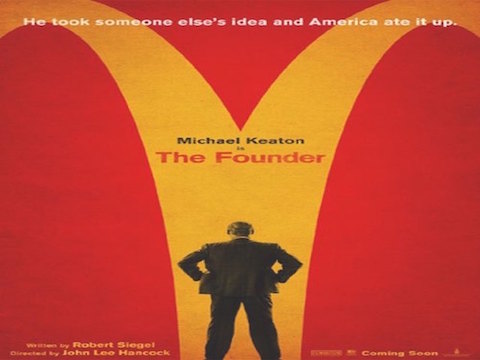