Ever since the movie Groundhog Day (starring Bill Murray) was released back in 1993, there’s been a slew of other movies and television programing that have followed in its footsteps. While I’ve seen most of them and feel none have ever surpassed the uniqueness of the original, one such film recently challenged that opinion, that being “Before I Fall.”

I should probably explain the premise of Groundhog Day first before I go any further though. To put it simply, it’s about a newsman who hates reporting the events of Groundhog Day each year in Punxsutawney, PA, until during one of them, he falls into a time loop and proceeds to wake up over and over again, on the same morning of the holiday he so despises, all till he learns how to become a more unconditionally loving person in life. “Before I Fall” doesn’t stray much from that overarching concept, although it’s more of a young adult drama than an all-around comedy like Groundhog Day is.

Nevertheless, “Before I Fall” centers around the life of Samantha Kingston (Zoey Deutch). Young, pretty, well-off, and soon to be graduating from high school, Samantha spends most of her time with three other teenage girls, all of a similar caliber. One could easily be reminded of a similar group of teenagers from the movie Mean Girls when watching them together on screen. Arrogant, stuck up, and focused solely on their own needs, wants, and desires in life, Samantha, Lindsay (Halston Sage), Ally (Cynthy Wu), and Elody (Medalion Rahimi) seem to only care about how they look, what guys they might be able to sleep with, and what parties are happening. This becomes overly apparent from the onset with Samantha when she wakes up to her phone’s alarm and is more interested in a text from a guy who doesn’t really care about her, instead of the piece of origami left on her bed by her little sister Izzy (Erica Tremblay) as a present. It becomes even more apparent a little later as she heads off to school when Izzy chases after her with the gloves she usually wears, hoping for a hug in the process, only to be yelled at by Samantha for touching her things. Later in school, Samantha continues to remain self-absorbed by joining in with her friend’s while they make fun of the one girl in school who stands out the most, that being Juliet Sykes (Elena Kampouris). Her streak of self-centeredness then heads into the night when the four attend a party held by Kent McFuller (Logan Miller), a guy who’s totally smitten with Samantha, who in turn wants nothing to do with him because he doesn’t quite fit her mold of what “cool” is. As the four girls proceed to get drunk, gossip, and eventually terrorize Juliet when she shows up at the party, a catfight ensues, causing them to instantly lose their buzzes and make the decision to head home. Unfortunately, Lindsay doesn’t pay much attention to the road while driving on the rain-soaked evening, focusing more on what music to play, when suddenly she hits something, causing her car to flip and potentially their deaths. But then Samantha’s alarm abruptly goes off on her phone, waking her up once again, playing the very same song that began her day yesterday. So, as the day begins to repeat a second time, Samantha is then thrust into the Groundhog Day premise, where she becomes the only one who knows the day keeps repeating, thus descending her into total confusion, frustration, and eventual hopelessness, and leaving her to ponder her life, her importance in the world, and who she ultimately wants to be.

“Before I Fall” has a number of twists and turns that Groundhog Day doesn’t and treads into somewhat new territory, choosing to deal with the serious-side of things versus comedy in the repeating-day concept. As I watched the film, I found myself truly connecting to Samantha’s angst more so than I did Bill Murray’s. Over the past seven years, while my days may have been moving forward chronologically, I’ve often felt as if I’ve still been reliving the same type of day over and over again, waking up each morning in incredible pain, and doing my best to get through it. Yet it’s all those pain-filled days that have also motivated me to question my existence, to question who I am, and to question who I truly want to be. It’s because of this I began to make serious changes in my life to become a more selfless and unconditionally loving type of being, as compared to the initial Samantha type personality I held for so many years. The person I am today is definitely not the same person I was seven years ago by any means, which is precisely why I connected so deeply and in tears to Samantha’s story. Watching her slowly wake up to the realization that she didn’t like who she was and seeing her find the motivation to become a better person in life, as each day repeated itself, really hit home with me.

Overall, “Before I Fall” truly stands apart from Groundhog Day, especially the ending, of which I won’t spoil of course. But if you truly like the repeating-day to learn life lessons concept, I highly recommend you check out this movie. While it may indeed not be totally fresh in its premise, it does hold enough originality and uniqueness to draw people in, like it did for me, which is why I give it 4 out of 5 stars. 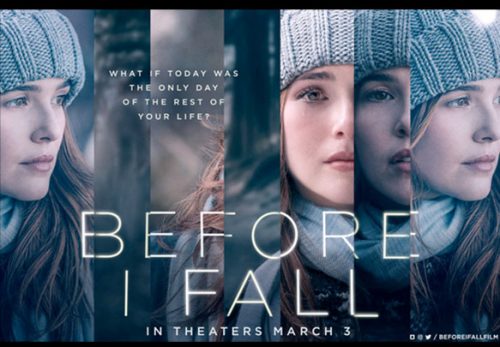