There are plenty of movies I resist seeing in the theater and even for home viewing, simply because I don’t like any of the trailers I see for them. And even when I’ve gone against that notion, and chose to see the full feature anyway, I’ve usually ended up regretting it, but not so with a 2016 film titled “Eddie The Eagle”, which I recently caught on television at home.

“Eddie The Eagle” is the true story of Michael “Eddie” Edwards (played by Taron Egerton), a determined British ski jumper who defied all the odds and qualified for the 1988 Winter Olympics. From an early age, Eddie’s only dream was to qualify for the Olympics, but due to a number of disadvantages that life dealt him from physical limitations to financial, it seemed as if Eddie’s dream was always beyond reach. But when he discovers his love of skiing and pursues it with all his might, he achieves local success, furthering his belief he’ll one day head to the Olympics. Yet even when he fails to make the competitive Olympic British team in 1988 for downhill skiing, he still doesn’t give up. That becomes overly evident when he learns there haven’t been any British ski jumpers since the 1920’s, as then he decides to quickly switch to the totally different winter event, convinced he will learn how to master the highly difficult sport all on his own and qualify for the Olympics there. And even through a number of setbacks and injuries, his determination eventually arouses the interest of a cantankerous coach named Bronson Peary (played by Hugh Jackman) enough to help him in his quest to become Olympic bound. In the end, it becomes apparent that Eddie is a man who never stopped believing in himself, even when so many counted him out, and becomes an unlikely hero in the process when he finally achieves his childhood dream.

When I first saw the trailer for this movie, I must admit I rolled my eyes and thought it looked kind of silly. And even after reading up on Eddie’s life on Wikipedia, I wasn’t motivated enough to head to the theater to see it. But zoom forward a year later when I noticed on one of those free premium channel weekends that my satellite company occasionally offers, that this movie was showing. I opted to record it to DVR mostly for my other half, as he had wanted to see it in the theater the prior year but never did. When we finally got around to watching it, I was less than enthused, half expecting myself to fall asleep during it. Yet, it was quite the opposite. Finding myself seeing some parallels to Eddie’s journey to the Olympics, to my own journey of self-healing, that many have often told me to give up on, just like they did Eddie, I actually found myself being pretty moved by the film. In a world where it’s rather easy to listen to others and give up on our dreams, our passions, and our goals, sometimes we have to look Higher and go deeper within, to channel enough energy that will help us defy the odds that so often seemed stacked against us. And that’s exactly what Eddie did in his own life, he never gave up and achieved his dream, which is precisely what I plan to keep doing and why I was so inspired by this film by the end.

I’m grateful for stories like Eddie The Eagle’s, because in a world where negativity seems to be abound these days all around me, it’s stories like his that truly help me to keep going and never give up on something I know I can achieve, God willing, just like Eddie did… 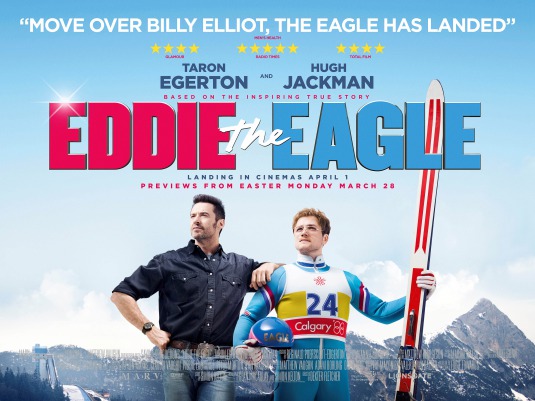