Recently I watched the movie “Trainspotting” (1996) for the first time along with a few friends of mine who’d already seen it. It’s mainly a film about heroin users that on some level seemed to occasionally take a humorous look at an addiction that’s really never humorous.

“Trainspotting” centers around the lives of Renton (Ewan McGregor), Spud (Ewen Bremner), and Sick Boy (Jonny Lee Miller) and the Edinburgh drug scene they are deeply immersed in. The movie focuses on all the highs and lows that a heroin junkie tends to go through including the crimes it takes to support their habit, the losses that stack up while engaging in their habit, and the hell that one goes through in any attempts to kick their habit.

What I struggled the most with this movie is the way the heroin addiction was portrayed, as many of the sequences that were involved were shot in such a way that it made the viewer laugh at the antics a heroin addict might go through. But in the world I live in, there’s nothing funny at all about heroin addiction. Every year the rate of heroin users continues to increase along with its rate of deaths. 13,000 people actually died in 2015 from this drug and I have personally watched countless lives throughout the rooms of recovery be destroyed by this disease.

Thus, watching Renton in this film fully crawl into a disgustingly dirty toilet that he just defecated into to retrieve two pills didn’t make me laugh one bit. Or watching Spud lose his bowels in a bed he slept in because he was so messed up and then seeing them eventually be sprayed all over everyone the next morning when the family grabbed the sheets out of his hand that he personally wanted to wash, didn’t make me laugh either. There were plenty of other scenes throughout the film as well where I noticed my friends were laughing, but I just couldn’t.

Because in my world where I’ve seen four sponsees, all under the age of 40, die from heroin overdoses, or where I’ve seen my actual friends steal, go to jail, hurt, maim, and attempt to kill all for this drug, made it kind of hard to watch a film that makes more light of an addiction that ultimately is extremely dark.

There was one scene in the movie though that I feel accurately depicted this disease at its worst and it involved a baby that was being brought up in an apartment where all these junkies hung out. It crawled around innocently, playing, and laughing as the mother thrusted one needle after another in her arm day after day. But one day, after an extended period of using, the woman discovers her baby dead in its crib, looking blue, malnourished and very diseased. As she screams and cries, Renton decides he needs to shoot up to deal with it, which she agrees is necessary as well. Soon, she’s high, her screaming is over, and she appears to care less about the loss. I shudder as I still picture these movie scenes in my head, because it’s scenes like them that happen far too often in the real world with heroin users. It reminds me of that family that shot up heroin in their car last summer, both passing out and overdosing while their baby sat in the backseat.

None of this is funny! Heroin addiction is never funny! It’s deadly and it’s taking the lives of many beautiful souls more than any other drug out there right now! People don’t come into the rooms of recovery and laugh about their heroin addiction, most in fact are usually crying because they’ve lost so much. Personally, I’d prefer to watch a film that has a more realistic approach to heroin addiction, that correctly shows the disease at its worst and never with humor. “Requiem For A Dream” was a great example of that.

Nevertheless, while director Danny Boyle does a good job highlighting some of the craziness that a heroin user goes through in his movie “Trainspotting”, I was left rather disappointed because I felt the film could mislead some who see it into believing that heroin is not as deadly as it truly is.

Heroin addiction is nothing to laugh about. It’s a serious problem in our country right now and I actually live in a state that leads the nation currently in overdose deaths. That’s not funny and never will be, so hopefully films that come out in the future about this disease will focus only on the bleak outlook that comes with it. And maybe, just maybe, they’ll also focus on the hope that does exist out there for a heroin user, that being the 12 Step rooms of recovery.

So, overall, while “Trainspotting” was a good cinematic movie in that it was original in its own design, its biggest flaw was in showing humor with an addiction that truly is never humorous at all… 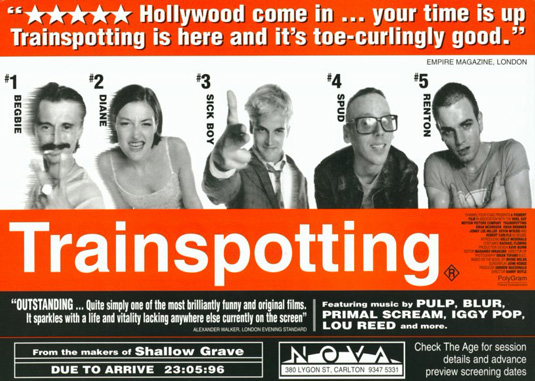