While many may only be able to think of Chris Evans as the star-spangled superhero named Captain America, seeing how he’s played that role in seven films over the past six years, he has also acted in a number of other movies as well, some quite good in fact, one of which being “Gifted”, which I just caught a screening of recently in the theater.

“Gifted” is about man named Frank Adler (Chris Evans) who has solely been raising his deceased sister’s daughter Mary (Mckenna Grace), ever since her mother committed suicide. Mary is exceptionally intelligent, showing a brilliance well beyond collegiate levels at only 7 years old, especially in the area of mathematics. But, Frank feels she needs to be more like girls her own age, instead of spending all her time focusing on complex mathematical equations and hanging out with their adult neighbor Roberta (Octavia Spencer). So, he opts to send her off to public school in the hopes she finds that, but it becomes immediately apparent once there that Mary is bored, unchallenged, and has no desire to remain there. When her teacher Bonnie (Jenny Slate) notices this, and begins to see Mary’s arithmetic gifts emerge during their normal classwork, she quickly brings it to the attention of Frank and the school’s Principal, Gloria Davis (Elizabeth Marvel). Frank becomes adamant when they both suggest that Mary attend a school for gifted children and says Mary is just fine being right where she is. That answer doesn’t go over so well with Principal Davis though, who ends up getting in contact with Mary’s grandmother, Evelyn (Lindsay Duncan), as it’s her hope that Evelyn might be able to change Frank’s mind. Unfortunately, Evelyn is the very person Frank has been trying to keep out of Mary’s life and as soon as she swoops in, it becomes pretty obvious why, as her only desire is to see Mary develop her mathematical gifts. But when Frank refuses to compromise with Evelyn, she decides to take him to court for parental rights, thus drawing Mary into a fierce custody battle where the victor will either be Mary remaining the child Frank desires to continue taking care of or the prodigy Evelyn wishes to groom Mary into.

Overall, I really enjoyed this film a lot. I laughed, cried, and felt my heart move more than not throughout the entire running time and almost wished it didn’t have to end when the credits finally rolled. I’ve seen a number of child prodigy films over the years, none of which tugged at my heart-strings as much as this one did. Why that is has a lot to do with the incredible acting of both Chris Evans and Mckenna Grace. It was very refreshing to see how far Chris Evans has come in his acting abilities, as I clearly remember watching him in one of his first starring roles way back in 2001, where he played a totally goofy teenager in a spoof-based film titled “Not Another Teen Movie”. As for Grace, an eleven-year old actress who already has over forty acting credits to her name, she played the conflicted and genius seven-year-old so well that if “Gifted” had been released during awards season, there’s a good chance she would have been nominated for her role.

Nevertheless, while I may not be a genius on any level nor ever have been, and while I may not have ever gone through a custody battle either, I definitely could relate to the material of this movie, especially the family dynamics of Frank, Mary, and Evelyn. On some level, Evelyn was a lot like my mother, as she constantly drove me to overachieve in everything I did. My father on the other hand, was a lot like Frank, and seemed to always stress the importance of being of kid, even as an adult.

So maybe that’s why my heart moved as much as it did while watching “Gifted” and because of that, I highly recommend seeing it and give the film my best rating of five stars. 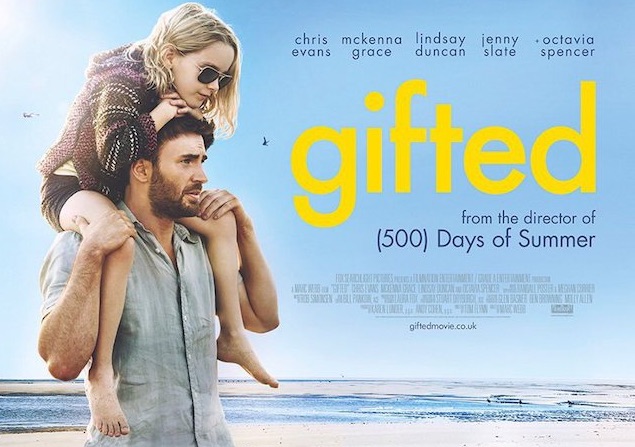