Hazing has often been used as a rite of passage tool for membership into many organizations throughout history, especially Greek fraternities and sororities. And although it’s definitely diminished in recent years due to increased regulations being instituted on many college campuses, hazing still goes on underground and “Burning Sands” is a great Netflix movie that depicts this quite well.

“Burning Sands” primarily revolves around the life of a pledge named Zurich (Trevor Jackson) who’s desperately trying to overcome that which his father never accomplished, that being to become a member of a black fraternity named “Lambda Lambda Phi.” The film begins during the final week of pledging, which for all purposes is called Hell Week, and showcases how Zurich’s academic and personal life get totally thrown to the side during it. Instead, his world becomes one where he allows himself to regularly be humiliated, degraded, taunted, paddled, and disciplined again and again, by a number of already initiated brothers, all for the sake of achieving his dream to become a Lambda Lambda Phi.

Watching “Burning Sands” reminded me so much of a life I lived 25 years ago when I myself pledged a fraternity. While I may not have gone through any physical beatings during any of that process, I did experience an incredible amount of mental and emotional torture that often led me to profusely cry. Having weekly line-ups in severely overheated rooms, sometimes for as long as three hours, where my pledge class had to answer trivia questions about initiated brothers, and being screamed at when we didn’t know the answers, was probably the hardest hazing I ever went through. But add in a night where I had to drink the quantities of a bunch of shot glasses where the contents were unknown and another where I had to consume a six-pack of warm beer as fast as I could, throwing up profusely over and over again in the process, made for some hellish hazing memories I’ll never forget. Yet through it all, I wanted to become a brother so bad that I was willing to do just about anything, just like my friend did who got his arm broken during his pledging process of another fraternity, most likely from paddling, yet continued forward till he finally became a brother.

That’s how come I could relate so much to why Zurich allowed himself to endure what he did in his own pledging process in “Burning Sands”. You see, by the time an individual gets to the final week of pledging, their mind tends to become willing to do just about anything to cross over and become a brother. But sadly, as I reflected on this movie and on my own pledging process, I realized that hazing is not only incredibly dangerous and potentially deadly, it’s also something that only continues to live on because those who get hazed only become the hazers once they get in, attempting to enact their “revenge” on those pledging next, thus becoming a vicious cycle that never ends.

Thankfully, my fraternity isn’t one of them anymore, as they put an end to it some time ago. Gone are all hazing tactics, which were replaced by a pledge process that involves much healthier principles to shape a person into a future brother. Unfortunately, that’s not the case with many other fraternities, sororities, and other organizations though who still buy into the idea that hazing is ok and just a part of the rite of passage. Hence why there is always at least one death each year on a college campus somewhere due to this practice and it’s usually where alcohol was consumed to toxic levels. And there are many other hazing tools as well that are just as deadly, none of which ever really help a pledge become a better person or a better brother.

And it should be mentioned as well, that another reason why hazing, like in “Burning Sands”, continues to live on is because of the fear that’s instilled into pledges along the way. Fear that scares a person so much that they are afraid to tell anyone what they’re going through, just like what a person experiences in an abusive relationship from their abuser.

So, while I became willing to do whatever it took, including living in constant fear, just as Zurich did in “Burning Sands”, simply to become a brother, it was truly an eye-opening experience to watch this Netflix film and be reminded quite well of why hazing needs to be completely done away before any more injuries, PTSD, or deaths ever occur. 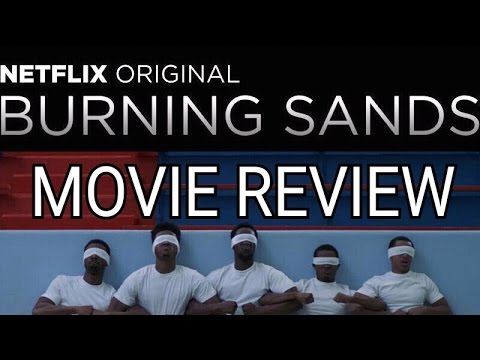