I was never really able to imagine what it might feel like to lose a limb permanently. That was until I watched Jake Gyllenhaal tackle the roll of Jeff Bauman in the 2017 movie “Stronger”.

On April 15, 2013, Jeff Bauman was standing near the finish line of the Boston Marathon, waiting for the girl he wanted to spend his life with cross it. As he proudly displayed his colorful hand-made sign, the first of two terrorist pipe bombs went off next to him, completely severing off both of his legs from below the knees. The heart-wrenching, but inspiring journey of Jeff Bauman’s long road to recovery after this terrible tragedy is the basis of the film “Stronger”.

Jeff Bauman didn’t feel much like a hero after he lost both of his legs, in fact, he felt completely useless in a world that no longer made sense to him. Yet, somehow, I believe it was God who saw fit to use this senseless tragedy and turn Bauman into a symbol of hope for so many, including me. As I watched the 2-hour film, tears constantly dripped from the corners of my eyes because I saw a human being who suffered far greater than I ever have, find a way to keep going, no matter how painful his circumstances.

Suffering from incredible PTSD, having to relearn some of the most basic bodily functions like walking, bathing, and going to the bathroom, and even just trying to fit in, in a world that can often be so judgmental, Jeff beat the odds and never fully gave up. Much of that is in part due the support that I believe God orchestrated in his life that included his girlfriend, Erin Hurley (played by Tatiana Maslany), his friends and family, and a city who all surrounded him with enough love to help him keep going, even when he didn’t want to.

While I may still have all of my limbs intact, I have suffered immensely from chronic pain and physical limitations like Bauman, that have sidelined me from living a life like I once did many years ago. There have been far too many days where I’ve wanted to give up just like Jeff did at times after losing his legs, yet God saw fit to bring into my life a number of people who have offered me plenty of love and support to help me not give up, like I believe he did for Jeff too.

Thanks to my partner Chris, my best friend Cedric, my spiritual teacher Manin, two therapists named Katie and Linda, friends I’ve met since moving to Toledo like Karen, Steve, Robb, Michael, Les, and Frank, a polarity practitioner named Caryn, a kinesiologist and nutritionist named Joel, several acupuncturists named Kimberlee, Shelly, and Yelena, and an individual named Randy who was the one who initially helped me to get through this when it all began, I have always felt supported in some way, even through the worst of pain, to keep going and never give up.

Like Jeff Bauman quickly discovered after waking up in the hospital with his legs gone, it is so easy to feel hopeless when the mind and body are riddled in tons of pain and agony, day in and day out, for weeks, months, and even years. But Bauman eventually embraced his tragedy and turned it into something that has become inspirational for countless others and this is the very reason why I continue to blog about my healing journey, hoping to do something similar for others.

“Stronger” is definitely the most moving film I’ve seen in a very long time and is a tearful one that really can bring hope to the hopeless. I’m extremely thankful to its director, David Gordon Greene, and its screenplay writer, John Pollono, for taking Jeff Bauman’s book (titled the same) written by both him and Bret Witter, and turning it into a movie that I know will move many hearts.

If you are someone who has been suffering in pain for some time, I encourage you to go see this movie, and know that even in your worst of circumstances, I wholeheartedly believe that God is working in your life to help you keep going, just like he has been with Jeff Bauman and me. 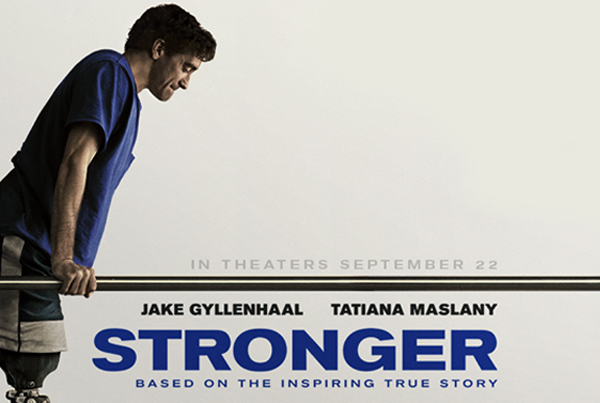