I know a movie with the title “Happy Death Day” probably doesn’t sound all that appealing to most, as it initially didn’t for me, especially being someone who’s normally not into horror movies. But I opted to see it anyway, simply because it utilized the “Groundhog Day” style of filming where a person continues to repeat the same day over and over again until they figure out why they’re repeating it in the first place.

Ever since Bill Murray starred in “Groundhog Day”, I’ve really enjoyed seeing this style of filming show up in other ways such as in movies like “Edge of Tomorrow” and “Before I Fall”. Now another title, that being “Happy Death Day”, can be added to that list and while it was similar in concept, it did have its own unique edge like each of its predecessors did.

Why I keep finding myself spiritually connecting to this concept of a movie is because it feels a lot like my life. In each of the “Groundhog Day” type of movies, the protagonist is always someone who isn’t too nice of a person. In fact, they usually seem to be quite stuck on themselves. In other words, they are always selfish and self-centered to the core. But through a series of countless days being repeated over and over again, they begin to see the ugliness of that within themselves and eventually find a path of redemption by turning to a life of unconditional love and kindness.

And oh, I can so relate to that, because after all, pretty much every single year prior to April of 2010, my life was super self-absorbed into one thing, me. I thought of me first. I thought of my needs, wants, and desires first and I never cared about anyone else’s. Instead, I tried to make the world revolve around me. And then one day, it happened.

My left leg developed some serious numbness. And that began a life of one health problem emerging after another. But each have helped me to slowly see just how self-centered of a person I had become in life. Over the years, my perception of the world has shifted because of this, as a life of pain definitely shifts one’s view of things around them. Now, I find myself caring a lot more about the planet, my family, my friends, and every one I come across, especially those who too are going through great trials and tribulations in life.

Unfortunately, I’m still repeating the same day though, as I continue to wake up every morning and feel all that uncomfortability in my mind and body from the pain. And when one goes through pain like this on a consistent basis, it doesn’t matter what happens during the day, because things always feel the same. Activities feel the same. Meals taste the same. People sound the same. Everything appears the same in our minds and life begins to feel monotonous.

“Happy Death Day” reminded me a lot of this, except in this movie, things weren’t centered around chronic pain. In this case, it was about a selfish sorority girl named Tree Gelbman (Jessica Rothe), who keeps getting murdered on the night of her birthday by a masked individual, which only results in her waking up on the same day in a stranger’s dorm room feeling hungover. As the days repeat, Tree proceeds to face the same set of circumstances of her selfish life and attempts to figure out who keeps killing her and why. And along the way, she slowly finds the path to redemption of her character by becoming a more unconditionally loving person.

I know this might sound like a stupid concept for a movie, but for those like me, who live out every day battling some type of chronic pain, it’s so easy to relate to films like this. Because deep down, we each want our repeating days of pain to end, to feel a little more normal in a world that never feels normal to us, and to smile and be happy for once, rather than to piece ourselves together and repeat one frustrating day after another.

So, maybe that’s why I tend to spiritually connect to films
like “Groundhog Day” and “Happy Death Day” as much as I do, because they always give me some hope in such a strange way. Hope that one day God will have me waking up into a new life, one that isn’t filled with repeating one day after another in chronic pain. And one where I finally smile from ear to ear, while feeling grateful for the shift I went through in those series of repeating days, from a life of selfishness to one of selflessness. 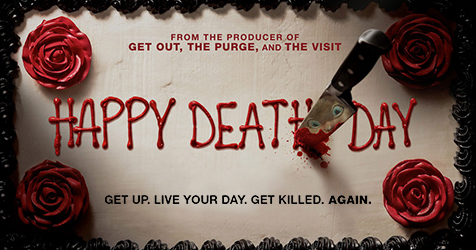