Have you ever watched a movie that you found yourself hating throughout the majority of it until suddenly it all came together by the end making you completely love it instead? “Brittany Runs A Marathon” was one such film that did this very thing to me just recently.

Based upon a true story, “Brittany Runs A Marathon” is about a woman named Brittany (played by Jillian Bell) who is extremely unhappy with her life on just about every level. Self-loathing, self-deprecating, hating the fact that she’s seriously overweight, frequently drinking and drugging to numb herself from those facts, and constantly character-assassinating others to make herself feel better, Brittany is an incredibly hard person to like. Her only friend is her attractive, self-absorbed roommate Gretchen (played by Alice Lee) who seems to enjoy being around her because it makes her look better. One day when the pain becomes great enough though, Brittany decides to go outside and start jogging, for one entire block. Quickly realizing how unhealthy she’s become on just about every level in life, she sinks to the floor in her kitchen and begins to sob, which in turn attracts the attention of her physically fit and regularly jogging neighbor Shannon (played by Jennifer Dundas), someone Brittany is very much jealous of and judges quite a bit. But when Shannon extends an olive branch and invites Brittany to jog with her in a local running club, Brittany actually shows up and along the way runs into another person equally as unhappy with their health, that being Seth (played by Micah Stock). As new friendships attempt to make their way into her life of people who actually do genuinely care about her, and what begins as a desperate attempt for a quick fix but soon turns into a quest to become something better and far different than the person she’s come to loathe so much, Brittany is on a marathon to discover that deep down within her is and has always been a person to like and to love.

Going to see “Brittany Runs A Marathon” honestly came as a last-minute decision due to feeling exceptionally frustrated and empty inside one afternoon. Making that abrupt decision to go see it was definitely one of the best ones I’ve made in recent times, as this movie totally ran me through the gamut of emotions that in the end paralleled the spiritual journey I’ve been on since 2010. Back then, I was no different than Brittany, silently scorning myself and everyone else too, living in addiction, and selfish and self-centered to the core. While my desire for change didn’t begin with a pledge to jog one city block, it did begin when I opted to get on my knees and mutter a deeply-heartfelt prayer to God to become a much more spiritually-centered, instead of addiction-centered, individual. Ultimately, I simply wanted to become a selfless disciple of God. Ever since, I’ve been on my own marathon of sorts, one that on far too many days I’ve wondered if I’m ever going to make it to the finish line, wherever that is and whatever it looks like, neither of which I’m sure at this point. Indeed, like Brittany, along the way I’ve gone through many intervals of transformation that’s included a lot of pain, hardship, losing a number of friends, and feeling like God is a million miles away. Yet, somehow, like her, I’ve kept running, one day after another, all with one goal in mind, to complete my marathon, that being to self-heal from within from all the toxicity I took in from countless lower vibrational actions I partook in from this life and four prior ones as well. While God may not have shown me any ending in sight yet from this long-suffering marathon of sorts, I can say that the individual I’ve become thus far is a far more likeable one than who I was when I began it.

So, for now, I continue to live with faith and hope that one day I’ll cross some type of finish line where like Brittany, I can look back and see that all the pain and agony I experienced getting there was more than worth it because frankly, I’m worth it. 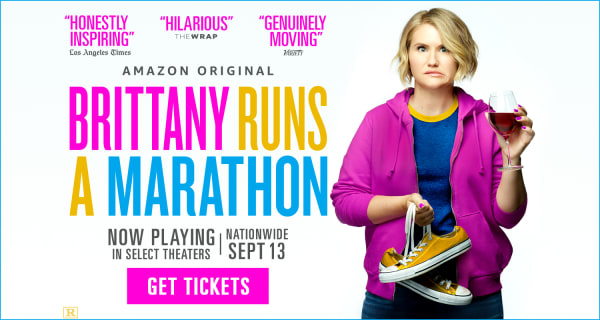