Sometimes I really think that God has some pretty unique ways of reminding us He truly is there and not some figment of our imagination. I say this because of something that happened recently that fell into my lap and ended up being an incredible blessing for not only my partner, but for me as well.

It all began a few weeks ago when I was spending time with one of my sponsees at a local coffee shop when she mentioned she was going to the Adele concert the following week. I told her how lucky she was given that Adele’s entire North American tour sold out in minutes and any tickets that were out for resale were going for incredible sums of money now.

When she asked if I liked Adele, I told her it really was my partner who was the fan. In fact, my partner Chris is such the fan that he flipped out when his favorite cd from her got stuck in his car player. Thankfully he did manage to get it out, but the cd player stopped working after that, of which I joked with him and said it’s probably because he played her cd too much!

Nevertheless, while I think Adele’s voice is amazing, I told my sponsee that it ultimately was my partner’s music idol and not mine. His dream has been to see her in concert ever since buying her “21” cd many years ago. So when my sponsee told me she had two extra tickets for one of her upcoming shows in Auburn Hills, Michigan, I was shocked. I asked if she was willing to part with them and half expected her to say they were already spoken for, given the concert was less than a week away and if they weren’t spoken for, that she probably was going to ask for an incredible sum of money, of which I know I couldn’t afford.

Ironically I was wrong on both accounts. She hadn’t sold either of them yet and actually offered them to me at face value ($98 a piece). What was even more surprising then that was how both Chris and I had the night free to attend her concert given how busy our schedules have been lately. I of course immediately accepted her offer and told Chris to block off next Wednesday evening.

Up until the night of the concert, Chris had no idea what or where I was taking him to. Because of this, I took a rare opportunity to toy with him a lot over it, telling him we had a big road trip ahead of us. I suggested the event might be taking place in Columbus, Cleveland, and a bunch of other locations. At one point I even had him convinced we were just having dinner and seeing a show at a casino in Detroit. I must admit it was rather funny to see him squirm, as Chris isn’t one to usually handle waiting for surprises to manifest that well.

So when the night finally arrived and we could see the Palace Stadium sign up in the distance on our approach, I reached into my console and handed him a large black envelope, which was labeled across its front in bold with one word “ADELE”. As he took a moment to take it in, he suddenly burst into tears and abruptly grabbed my hand with no words to say.

But I didn’t need any words because I felt something I hadn’t felt in a long time. Joy. Joy from a place that is hard to have when your body is riddled with chronic pain every single day. But that joy wasn’t for myself, it was joy for someone who truly deserves the best, especially with what he has to go through every day when it comes to handling my health issues. And in all truthfulness, Chris and I have had some serious struggles feeling close to each other lately, mainly due to the roller coaster of things I do go through with my health day in and day out.

Yet all of that seemed to dissolve away immediately as he grasped that envelope and continued to cry profusely. And his tears continued through most of the concert, as he savored every one of the songs Adele performed and every word she spoke with great passion to the audience. Watching Chris’s soul move for those several hours was one of the best blessings I’ve had in a very long time and I know God somehow had to be behind making it all happen.

While it may not have been the answer to the many prayers I’ve been asking for with my health and healing, it definitely was the answer to something we obviously both needed. That’s why I sometimes really believe we often fail to see God is always sending us blessings because they often come in ways our brains and egos don’t normally conceive of.

But I’m grateful I realized it in this case and so I thank you God for making Chris’s dream come true and for helping me to feel a ray of Your light come from something as simple as an Adele concert in Auburn Hills, Michigan. 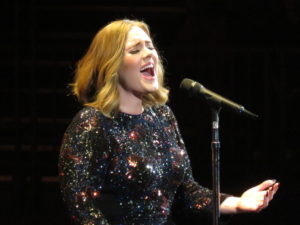