I’m sure there is a voyeur in every one of us somewhere, because simply put, humans are just curious people, especially when they can spy on someone where the person they are spying on doesn’t know they are being spied upon. That’s the basic premise of the 2020 Oscar Live Action Short winner.

Coming in at a run time of 21 minutes, “The Neighbors’ Window” is about a couple, Alli (Maria Dizzia) and Jacob (Greg Keller), who one evening in their city apartment look out their window and see that in the apartment directly across from them is another couple who are madly and passionately enjoying sex with each other. They watch for a while, remembering the days when they too were able to do the very same thing, prior to having three children who now take all their time up. They immediately decide to turn their lights off, in quite the comical fashion, continuing to appreciate the view, and it doesn’t stop there. As time passes, they can’t seem to stop themselves from being voyeurs of a couple they don’t know, feeling jealous all the while of the pair who from their eyes does nothing but have parties and engage in lovemaking. They even pull out an old set of binoculars to further engage in their incognito voyeuristic viewings, when one day Alli notices the man suddenly comes home with his head shaved and remarks how he must be trying one of those new hip hair styles. Not too long after she then notices he’s now in a hospital bed with the woman he obviously loves crawling into it next to him, sharing what appears to be quite a sorrowful moment together. And then, the day arrives shortly thereafter when Alli fully comprehends what’s been happening, when the man is taken away in a body bag, while the woman tearfully leaves her apartment alongside the paramedics. Alli abruptly decides to race downstairs, finding herself now standing at a distance from the woman sobbing outside her apartment building as the ambulance takes the man she loves away. Wanting so badly to comfort a person she feels she knows, but really doesn’t, Alli’s grief consumes her enough to approach. After a moment of sheer awkwardness, the other woman (played by Juliana Canfield) unexpectedly apologizes saying that she and her husband (played by Bret Lada) had spent their last few months together watching Alli and her family from across the way, wishing they had the happy life they saw through the window of a happy couple and their three beautiful kids. As shock overwhelms Alli, the film ends with her deeply embracing the woman in tears.

Wow…was all I could say when the credits rolled and tears fell from my eyes. Even as I write these words, I find myself still choking up about the message this film presented.

How often in my life have I silently observed someone who didn’t know I was observing them, whether that be through Facebook or Twitter, or maybe in a mall, or at a dinner out, or at a movie, or some coffee shop, or maybe something else altogether, believing the life I was watching was so much better than my own? I wonder how many of them have looked at me in the very same way?

It’s so easy to believe that which we silently observe in another’s life looks so much better than our own. But the truth is they often tend to be just as much filled with their own pains and sufferings of life, yet we just aren’t privy enough to ever know of them. Because people often put on faces and facades in what they post on social media or what they present out in public, keeping the negative parts of their lives in secret.

Far too regularly, people have misjudged me from a distance in the same way, thinking I have this great life because I don’t work at a day to day job, because I spend my days in my gardens and my evenings working in the recovery realm or going out to dinners and movies. They don’t see the pain that ravages on in my body that never seems to end, or all those mornings, afternoons, and evenings, where I’m gushing torrents of tears over the state of my life, or loneliness I feel, or the depression I battle, all because God remains silent with me.

Life is usually far different than what our eyes perceive from a distance and “The Neighbors’ Window” is such a clear reminder of that. Coveting another’s life we may observe from afar put quite simply, isn’t healthy. Because maybe the life we’re living is better than we allow ourselves to believe solely because we spend too much time comparing it to others instead of being thankful for what we’ve been given… 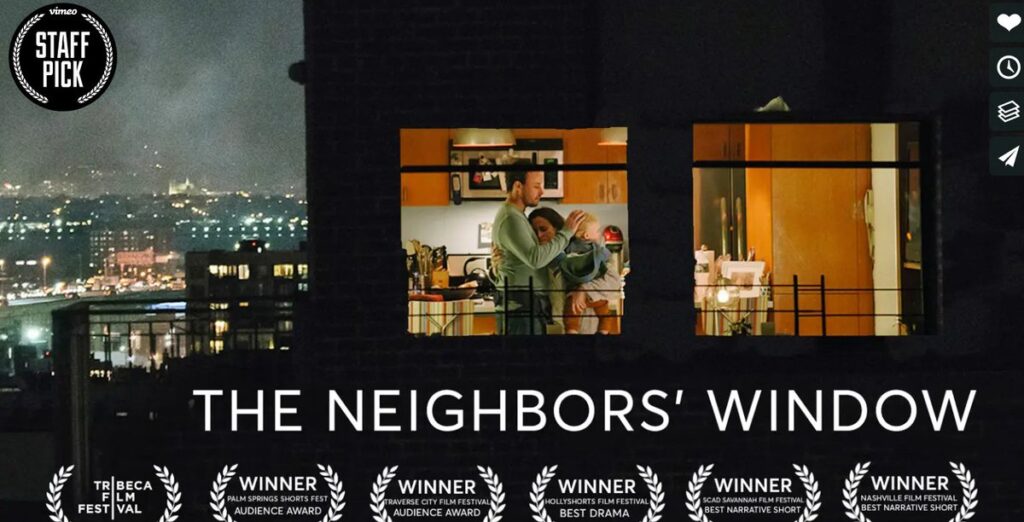