I really miss television shows like “Touched By An Angel” and “Highway To Heaven” and a bunch of others that were spiritually-centered and truly uplifting back in the 80’s and 90’s, because it seems as if those types of shows aren’t quite as popular anymore in mainstream society. Rather, what appears to connect the most with viewers these days are programs filled with crime, drama, blood, and violence. Occasionally though networks have attempted to bring some of that good-natured programming back through series like “Joan of Arcadia” and “Eli Stone”. Unfortunately, each have never lasted more than two seasons because the Nielsen ratings weren’t high enough to continue justifying their production. This year though, another has emerged that really has been lifting my spirits again. It’s called “Kevin (Probably) Saves The World” and is airing on ABC on Tuesday nights at 10pm.

Starring Jason Ritter as Kevin, the show is about a guy who has pretty much lost everything after attempting suicide. Because of it, his sister Amy (played by Joanna Garcia Swisher) agrees to let him move back to his hometown and live with her hoping it will help him get back on his feet. On Kevin’s first night home, a meteor strikes the Earth nearby Amy’s house, which Kevin and his sister’s daughter Reese (played by Chloe East) quickly investigate. Upon arriving at the crash site, Kevin races into the debris and decides to touch the piece of rock that lay at the center of it. As soon as his fingers connect with the glowing black object, he is sent soaring through the air and knocked unconscious. When he awakes, he meets Yvette (played by Kimberly Herbert Gregory), an angel of God, who tells him he’s the only remaining righteous soul and that his task is to find the other 35, as each are meant to help protect humanity and save the world. But for Kevin, who has lived a far from righteous type of life, at least in his mind, a journey of spiritual self-discovery and a somewhat resistant attitude towards a new life of servitude to God leads to the beginning of a series that’s actually been quite moving, funny, and uplifting.

Why I find myself so connected to this show and the few other spiritually-centered ones I’ve watched over the years like it, is the idea of an average person like me becoming utilized by God to do some type of special work on the planet. I too attempted suicide about six years ago and definitely have not lived a very righteous life up until just after that dark period of my life. But now, I’m doing my very best to focus all my energy on cleaning my life up and being a vessel of servitude to God, as it’s my hope that one day I will have a special spiritual mission materialize as well. Given all the pain and frustration I’ve gone through on my spiritual journey these past few years to head in that direction, I have looked for inspiration to keep me going and God-centered television shows have been one of those avenues for me.

That’s why I hope “Kevin (Probably) Saves The World” will actually make it beyond a season or two, and break that spiritual television show curse that I’ve seen constantly happening over the past decade or so. It really is a rare thing to find myself feeling so moved to tears of joy and laughter while watching a program on TV, and this truly uplifting show has already done that in its first few episodes. So, if you haven’t checked this series out yet and enjoy spiritually-centered shows like “Touched By An Angel” or “Highway To Heaven”, then give this one a chance, as I’m sure if you do, you’ll find yourself being uplifted like I am and isn’t that something we all need a lot of right now in this world anyway? 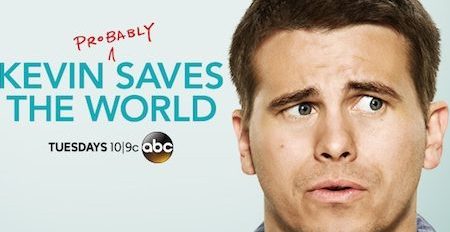